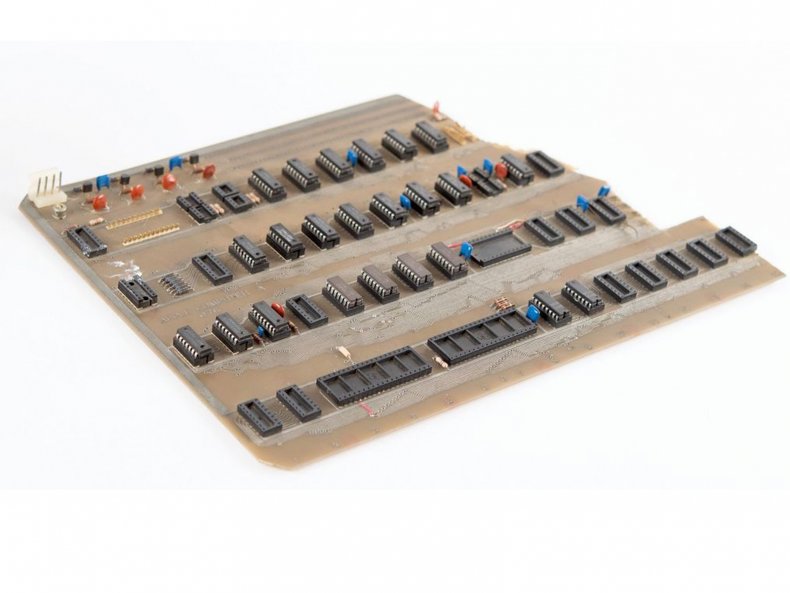 Steve Jobs’ very own original Apple computer prototype is going up for auction.

Boston-based RR Auction are overseeing the auction of the historic “Apple Computer A” printed circuit board, which was hand-soldered by Apple co-founder Steve Wozniak.

In 1976, Jobs used this prototype—once considered lost—to demonstrate the Apple-1 to Paul Terrell, owner of The Byte Shop in Mountain View, California, one of the first personal computer stores in the world.

“Without this prototype, and without Paul Terrell, the Apple-1 might have been just another computer kit,” said Bobby Livingston, Executive VP at RR Auction.

The demo resulted in Apple’s first big order and changed the course of history for the company—what Jobs and Wozniak had conceived as part of a $40 do-it-yourself kit for hobbyists became, at Terrell’s request, a fully assembled personal computer to be sold for $666.66.

Wozniak later put Terrell’s purchase order for fifty Apple-1s in perspective: “That was the biggest single episode in all of the company’s history. Nothing in subsequent years was so great and so unexpected.”

The board has been matched to Polaroid photographs taken by Paul Terrell in 1976, showing the prototype in use, first published by Time Magazine in 2012 and also covered by Achim Baqué of the Apple-1 Registry.

This Apple-1 prototype, listed second on the Apple-1 Registry and considered “lost” until recently, was examined and authenticated in 2022 by Apple-1 expert Corey Cohen. It is accompanied by Cohen’s notarized 13-page report.

The piece resided on the “Apple Garage” property for many years before being given by Steve Jobs to its current owner approximately 30 years ago. At that time, Jobs had been ousted from Apple and was looking forward to the promise of NeXT and Pixar.

Several of the ICs have been plucked from their sockets, as have the microprocessor and other components, presumably for use on early production Apple-1 Computers.

The board appears to have been damaged by pressure on the upper right, resulting in a crack that runs from adjacent to the power supply area above D12 down through the bottom of the board to the right of A15.

The missing piece is presumed to have been discarded, but can be reimagined thanks to Paul Terrell’s photographs of the complete board.

One of the distinguishing features of the “Apple Computer A” prototype was its use of three orange Sprague Atom capacitors, rather than the familiar ‘Big Blue’ capacitors used on the production Apple Computer 1.

Differences that remain between this prototype and production Apple-1s include the text on the left side of the board (the prototype reads, “Apple Computer A, © 76,” where the production model reads, “Apple Computer 1, Palo Alto, Ca., Copyright 1976”), and the population of a clock circuit at the top left, which would have allowed the computer to run on Motorola 6800 or MOS 6501 processors.

Although the production run of Apple-1 Computer PCBs retained this area (in a rectangle marked “6800 Only”), it was not populated.

The production version of the Apple-1 shipped with a 6502 processor, which had an on-chip clock oscillator that rendered the external timing circuit unnecessary. This Apple-1 prototype also lacks the green protective coating and white silkscreen parts labeling found on production Apple-1s.

Another important characteristic of this prototype is that it appears to have been hand-soldered by Steve Wozniak.

His unusual ‘three-handed’ technique—wire in one hand, soldering iron in the other, and solder held in his mouth—is evident in the tight ‘bubbles’ formed at the soldered connections.

Several ‘point-to-point’ circuit corrections were made on the back of the prototype to make the system functional, and appropriate revisions were incorporated into the first production run of Apple-1 PCBs. The layout of the circuit traces on the prototype board, therefore, differs from that on the production PCB.

A spokesperson for RR Auction explains: “Few Apple artifacts could be considered as rare, early, or historic as this Apple-1 prototype, which spent many years on the ‘Apple Garage’ property—a site now entwined in the folklore of American business, where two unlikely heroes founded an empire.

“Moreover, it is the perfect embodiment of the symbiosis between Steve Jobs, Steve Wozniak, and Silicon Valley: the brilliant businessman, the electronics Einstein, and the infrastructure in which they thrived.

“Without Wozniak, Jobs had no product—he very nearly joined a company marketing balance scales made out of cardboard. Without Jobs, Woz had no market—he had already given away the Apple-1 design to members of the Homebrew Computer Club, and had little interest in exploiting it for profit.”

The Apple, Jobs, and Computer Hardware auction by RR Auction began on July 21 and will conclude on August 18.

Produced in association with SWNS.

This story was provided to Newsweek by Zenger News.